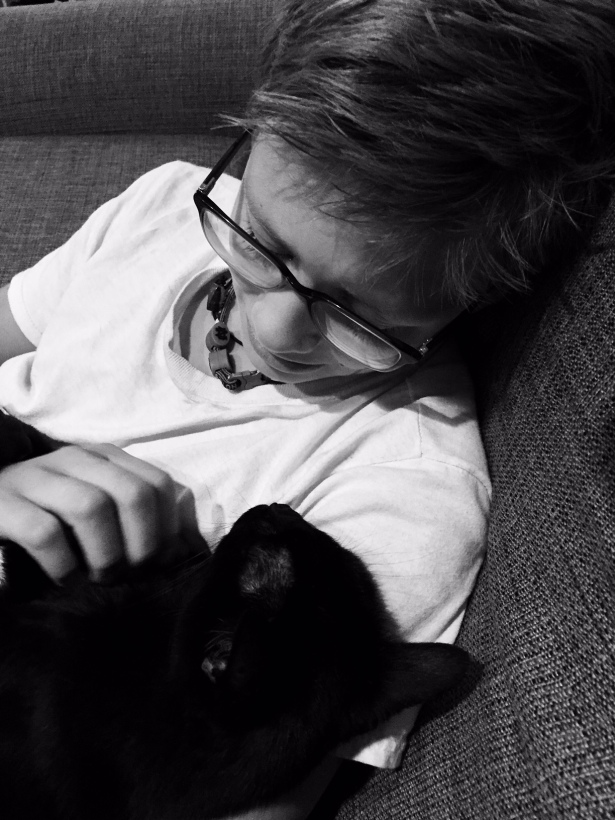 When we first brought home our kitten, Morpheus, I remember telling my mom that it was so strange to have another living being in our space. He was a teeny tiny little black fur ball. We soon learned that he did not have the typical grace of a cat. He was quite clumsy and broke many things.

He was constantly on the counters and under foot. Aluminum foil, spray bottles- nothing would deter this cat from his intended goal. We had to give up and give in. He nearly died, likely 9 times if I actually counted it up. Each time I was heartsick. He was a grumpy and demanding cat, but I never wanted anything to happen to him.

When our children came along, Morpheus exacted his personal prickliness onto them. He clawed and bit them. They bore his scratches almost constantly. Those marks were how we knew they were picking him up, petting him or loving on him. We were constantly yelling at the kids not to pick that cat up! That cat just didn’t love back the way we wanted him to.

Morpheus demanded fresh water from the tap. He would sit on the sink’s edge and meow at anyone who passed until a little trickle was produced. When we were settled on the couch, he would climb all over us with no regard for our comfort until he figured out whose chest he wanted to plop himself onto. Sometimes we pushed him off because we couldn’t breathe or see the TV.

Oh, that cat. I made no mystery of my disdain of him for 18 years. So, Friday at 5:00, when it was time to say our final good-byes, I was a little surprised by my emotional response to letting him go. Our 12 year old wanted to be with him. I wasn’t going to go. I changed my mind the day of. 12 cried from the depths of his enormous heart. It was so difficult to watch.

12 kept asking, “Is this what he wants? How do we know?” Good question. Morph had been unable to keep his bathroom business in the litter box for a while. He was deaf. And  we’re sure he was losing his vision. He had tremendous difficulty breathing. He was mangy fur and bones. We watched him try to jump up and fall. He was just a shell of his former self.

Just because there’s a member of the family who doesn’t quite fit in, who isn’t socially appropriate or doesn’t share the same views, (hopefully) you don’t wish his demise. In the end, Morpheus had a deeply moving send off. My husband, trying to lighten the mood, said, “Think of all the things he broke!” (My favorite challis from when I was pregnant with my first, our cookie jar, countless other glasses and little knick knacks) I looked down at our first pet and said, “I hated-slash-loved you. You will be missed.”

We have another black cat with white paws. Both my husband and I looked at him Saturday morning and thought we saw Morpheus. Recovery from losing an old animal is rather quick. It’s a few toys and pet beds and litter box clean up. And we resume our lives. I thought of Morpheus this morning as I was getting ready, and he wasn’t waiting for me to turn on the faucet for a drink. He was a cat we all loved to hate. Now it is healing time.

audahere I love words. My head swirls with words. I have many deep thoughts. Some thoughts plague me. In order to release them, I have to assign words. Once the words are strung together, I feel free again.