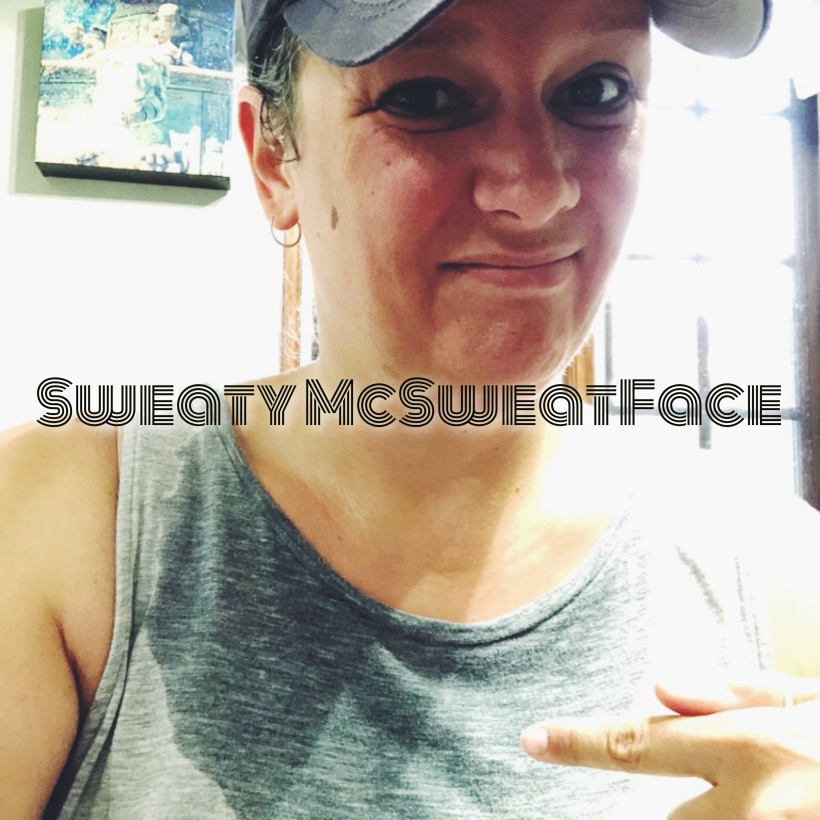 Do you remember the theme chant “Women glow, men perspire, pigs sweat” from a deodorant commercial in the 1980s? What an awful campaign. I was young, and already had a propensity to sweat and that commercial ruined me. I was a pig. I take after my dad and when it’s humid (and cool) or if I’m in motion on a warm day, my head gets hot. Eventually, sweat drips down my face and neck.

I sweat more than the average woman. It doesn’t take much. Because of this (and the fact that my skin absorbs sunlight like a hungry baby) I avoid the sun. I avoid any sort of activity unless I’m appropriately dressed for sweat catching. When asked what my favorite outdoor activity is, I say, “sitting.” I can sit at the park, I can sit in a hammock, I can sit by the beach… there are no shortage of ways that I can sit and enjoy the world.

I have a collection of bandanas that I use to mop myself. I have “keep cool” gimmicks you put in cold water and tie around your neck to keep yourself cool. That would be nice if they could stop the drips from dropping. But they don’t. I have UV umbrellas, and on particularly hot, sunny days I have no qualm about using them walking down the street of my small town.

The locals love that. They shout out “It’s not raining.” One time I had a man approach and say “Why do you have an umbrella out?” I patiently replied, “It’s an UV umbrella.” He said, “Well, I would never use one of those.” Okay, thanks so much for your unsolicited conversation, mister.

I’m just sweatier than most. And it wreaks havoc on my self esteem. I’m to the point that I get anxious when it gets warm out, and I’ll have to go somewhere. I pack a bandana in my purse in case I need to tie it around my head. The thing is, I sweat more than any activity warrants. I’m a photographer, and I usually sweat during my shoots. It’s a nervous sweat or an energy release, but there it is.

Once I was photographing an outdoor event. It was 64 degrees and cloudy, but super humid. I actually had people comment about my sweat that day, because “it’s not that hot outside.” Yea, thanks so much for the sweat shaming. It’s just what my body does. In what ways does your body surprise or disappoint you?

From a very young age (thanks to that commercial) I had myself classified as a pig. I wasn’t feminine, since I took “glowing” a little too far and dripped. I didn’t perspire like a man. When I was in my teens and loved to dance, I would dance until my hair was drenched. It would look like I came out of a shower. I could wring the sweat out my hair.

I watch my youngest son now, and he takes after my dad and I. Fortunately, he’s a dude, and I think they can get away with it easier. I hope nobody comments and asks him about it. And I hope to goodness that that commercial never airs again.

audahere I love words. Words swirl and dance around in my head. I have many deep thoughts. Some thoughts plague me. In order to release them, I have to assign the words. Once the words are strung together, I feel free again.